Showing posts from March, 2018
Show all

A Picture Can Be Worth A Thousand Words 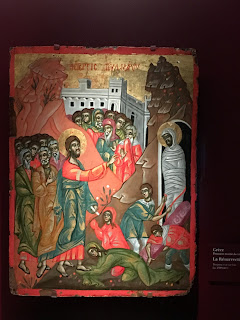 A Picture Can Be Worth A Thousand Words I wrote this in Paris, France, though we are home now. My wife and I were blessed on this trip. Last Sunday, we saw two remarkable things. They have to do with Christian faith and with the Bible, and so I will mention them here. First of all in Paris we went to a museum called the Petit Palais, where we saw a collection of icons from countries like Greece, Crete, Bulgaria, and Russia. (An icon is a very beautiful picture that is revered because of its message in the Greek or Russian Orthodox churches.) Some of them were about saints many of us have never heard of, but the majority were pictorial representations of Biblical events: the birth of Jesus, his showing his wisdom to the religious leaders in the temple when he was 12, his raising of his friend Lazarus from the dead, the last supper, his crucifixion, his resurrection, and his ascension into heaven. Then we went somewhere else in Paris to see more icons. It just so happened t
Post a Comment
Read more

Apologizing to Sodom and Gomorrah

March 23, 2018
Apologizing to Sodom and Gomorrah Ruth Graham, the late wife of the late evangelist Dr. Billy Graham is supposed to have said, “If God doesn’t judge America, he will have to apologize to Sodom and Gomorrah.” Those familiar with the book of Genesis will recall that the cities of Sodom and Gomorrah, near the present-day Dead Sea, sinned. God intended to destroy them, and Abraham, learning of this, bargained with God.   He began by asking God that if He could find fifty righteous people, would He preserve the cities.  God agreed. Finally, after more bargaining, Abraham asked God if even ten righteous people were found, would He please not destroy the cities. Again God agreed. But God did not find even ten righteous people, and the cities were destroyed. Some people say, “Aah but this was the wrathful God of the Old Testament;” however, Jesus and the New Testament also mention Sodom and Gomorrah. In Mathew 10, where Jesus is sending out the twelve apostles to “the lost sheep
Post a Comment
Read more
March 22, 2018
I have been out of the country with my wife and I have not posted my weekly newspaper columns  on my blog though they appeared in the Reporter News.. I shall post one today, an other the  next day, and by weekend I shall be caught up. Casey Life Overflowing Now Recently I sent birthday greetings to my sister Rebecca.   She replied “I have been living my life abundantly, and am grateful for each day.” Her words mirrored a verse of scripture which I love, John 10:10. In that verse Jesus says, “I am come that they might have life and have it more abundantly .” Please notice three things about this saying of Jesus: First, he says he came to give us life . In Deuteronomy 30, God says: “See, I have set before you today life and prosperity, death and adversity….I call heaven and earth to witness against you today that I have set before you life and death, blessings and curses. Choose life so that you and your descendants may live….(verses 15 and   19) God created all l
Post a Comment
Read more
More posts